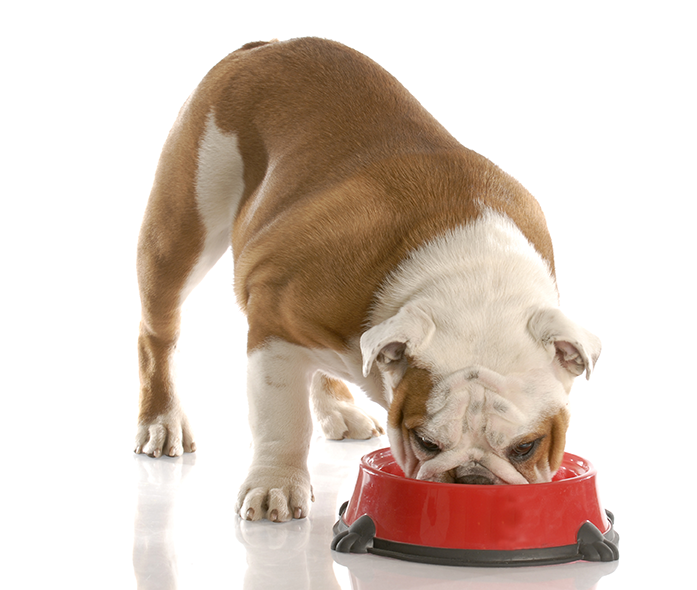 Gulp. Inhale. Swallow it whole. For some pets, wolfing down food is standard eating procedure, which frustrates owners who worry about their canine’s nutrition, health and behavior. The problems associated with eating food at the speed of light range in severity from relatively minor issues to serious life-threatening health risks.

Literally, for a dog, biting off more than it can chew means it is not grinding up food into smaller pieces. This can lead to choking and gagging as the pet tries to move pieces too large down his esophagus. Regurgitating the trapped food and stomach contents can also occur, which is often an inconvenience for both the pet owner and the animal.

Speed eating can also lead to increased burping and passing gas for the animal because it is swallowing lots of air in its food dash. Though not deadly, the end result makes close encounters with the pet less appealing.

For pets that eat too fast, bloating and a condition called GDV pose the most serious, potentially life-threatening health risk.

Though usually associated with larger breed dogs with deep chest areas (small dogs can also acquire it), it is caused by quick food consumption and the excessive air, fluid and food entering the stomach. This can swell the stomach area (dilation) and cause bloating. As the stomach enlarges and bloats, it can twist in such a way that nothing can pass from the stomach to the intestines. It cuts off the blood supply to the stomach, causing permanent damage to the stomach and/or death.

Dogs with GDV or serious bloating must be seen immediately by a veterinarian. Only an x-ray will determine the severity of the problem.

There are several reasons that may cause a dog to gulp their food. A savvy dog owner will need to do a careful analysis of the pet’s environment to find the trigger or underlying factor for the behavior.

Competition for a meal from other pets or perceived threats may force a dog to “hog” as much food as possible. Survival mechanisms may also be in place from having to fight with littermates for nourishment.

Some underlying health problems like worms or parasites might also play a role in food gorging. If these bodies are robbing the animal from the food it needs to survive, the dog could be on a mission to eat in order to fill this gap.

Consulting a vet for some options about the underlying cause of the rapid food consumption might also help lead to a solution.

For a concerned pet owner, who wants to keep his/her canine from harm’s way and slow down the chowhound, a wealth of strategies can be applied. Owners must keep in mind finding a solution may take a couple of tries, but there are ways to gain control of the situation.

One of the most consistent recommendations is to make the pet work around a large object in his food bowl. People have placed large rocks in the center or a ball or a toy. This forces the animal to eat around the object to pull out the food and be more deliberate in the process. Owners can also place a smaller inverted bowl in the middle of a larger bowl for the same effect. One idea is to divide up the meal in the cups of a muffin pan, forcing the dog to work more to get to the food, slowing down the speedy eater.

Several products are available to help dogs slow their eating. The Brake-Fast Bowl, a non-tip bowl, with knobs in the center, compels a dog to chase its food.

Other suggestions for gaining control of the situation are to embrace the use of treat and kibble dispensers that tip or rock, so the dog must slow down and tackle those mobility issues to eat. Some owners have spread small amounts of food around in several bowls so the animal must find the locations. The gap between the meals slows down the gulping. Still others have spread the food out over a large area or on a cookie sheet or large platter or rug so the dog must pick up each piece individually to eat it.

For some owners, feeding happens several times a day, thus limiting the mass buffet offering the dog is used to receiving. A few even hand-feed the animal to slow its food consumption, but while effective, many pet households may not have the time or patience to handle the situation like this.

As simple as it sounds, raising a food bowl to a stand or perch can also slow a dog down. It also changes his air intake as he swallows.

With another holiday season, look for ways to keep your dog safe and healthy. He can’t push away from the table or move his belt over another notch. 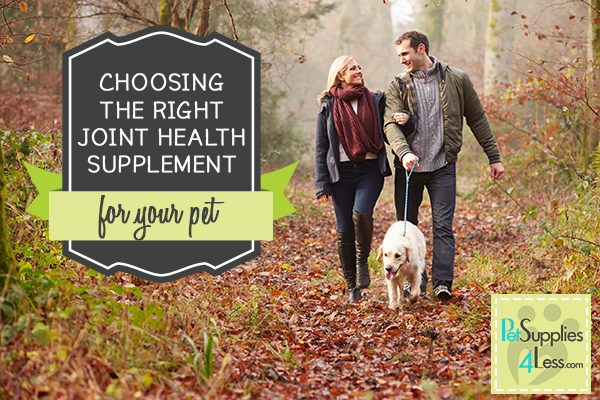 Cosequin® Standard Strength contains Glucosamine and MSM (Methylsulfonylmethane). When in combination these two ingredients work for joint support for your dog and help your dog to keep active at any age. Cosequin Standard Strength is available in a chewable tablet.

In addition to the combination of Glucosamine and Chondroitin Sulfate for joint health support Cosequin® Advanced Strength also includes vitamins and minerals. This tasty chewable tablet may be right for your dog if you are currently offering both a multivitamin/mineral and joint support supplement.

Help keep your healthy dog active with Cosequin® DS. Controlled U.S Veterinary studies* have shown that the use of Glucosamine and Chondroitin Sulfate combined protect joint health and help protect against cartilage breakdown. Cosequin DS is available in Chewable Tablets with a roast beef flavor or Capsules that can be sprinkled over your dog’s food.

Cosequin® DS Maximum Strength plus MSM has the extra ingredients of Glucosamine and Chondroitin Sulfate combined with MSM (Methylsulfonylmethane), offering additional protection for your dog’s joints and support of healthy cartilage production. It offers moderate joint support for dogs of all sizes. Cosequin DS Maximum Strength plus MSM is available in liver flavor as a chewable tablet and soft chew.

Joint health is important to your dog, but it is only a small part of your dog’s overall needs. Health and wellness begin with a great diet, fresh water, and preventative care, including vaccinations, parasite control, and dental care. Make sure to check out more health and wellness items on our website or call one of our customer service experts. As always, if you have questions about your dog’s health, consult with your veterinarian.

*Research and study documentation on file with manufacturer. 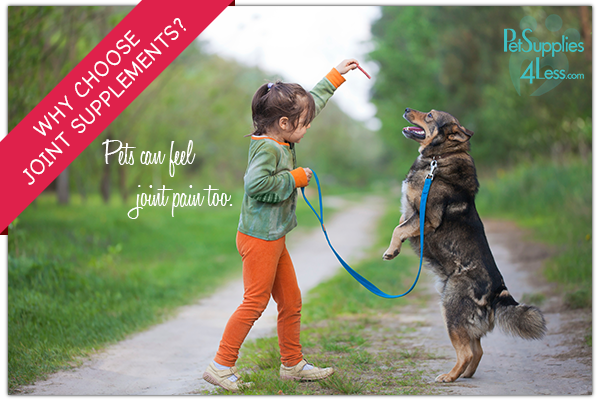 Everyone has experienced some degree of joint pain in their life. Whether it’s from running, lifting or just carrying out normal daily activity, joint pain and stiffness can occur. Our pets are no different and we must take care to keep them in peak physical condition. We can do this by feeding them a correct diet, making sure they get daily exercise, and by adding a joint supplement to their diet.

Joints can become damaged, not only from injuries, but also from every day stressors such as casual or strenuous physical activity. When inflammation occurs, white blood cells, enzymes, and free radicals enter the joint space causing damage to the cartilage. Not only is this extremely painful for your pet, but once the cartilage is damaged it can never heal 100%. This loss of cartilage and the smooth surface associated with a perfect joint are the reason for pain and decreased mobility as our pets age.

Prevention of problems, rather than treatment, will result in healthier joints and a happier pet. Your pet’s joint fluid and cartilage will protect the joint by cushioning the shock from running, walking, and even standing. Certain joint supplements that are high in quality glucosamine, chondroitin, and MSM help protect your pet’s joints and support healthy cartilage production.

Joint health is important for your pet, but it is only a small part of your pet’s overall needs. Health and wellness begin with a great diet, care, and parasite control. Make sure to check out more health and wellness items on website or call one of our customer service experts.

I’ve conned asked our vet to answer reader questions, so if you have a question about your pet, ask them here! We will do our best (and within applicable laws) to get you answers.

It’s Summer! It’s time to play in the yard and at the lake! It’s a time for fun with your family pet.

Here are some tips for a safe and happy summer: